If you’re familiar with Valentine’s Day episodes in Anime, there’s often quite a bit of fretting on the part of various female characters about who is giving chocolate to whom, or male point-of-view worries over who is going to be giving them a gift. 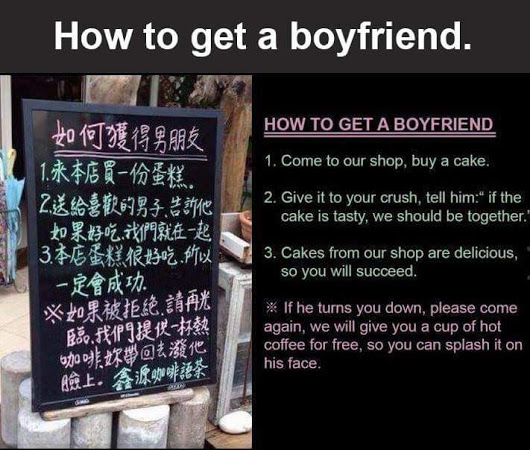 (This is not actually a White Day photo, but it’s frickin’ brilliant. Courtesy of Xinyuan Coffee & Tea in Taiwan )

According to legend, White Day was kickstarted by the candy industry as a way to split up Valentine’s day by suggesting that men should pay the women back in their lives who had given them chocolate or gifts on Valentine’s Day.  In 1977, a company by the name of Ishimura manseido(?) decided to market marshmallows to gentlemen in March, and the trend apparently switched to white confection chocolates the following year – making the first upswing of the trend in 1978.

There are two kinds of chocolate that are received on Valentine’s Day, and reciprocated on White Day.

In Valentine’s Day episodes, there’s usually additional fussing over whether to buy chocolate or to make it, and sometimes an entire episode dedicated to showing how determined the characters are to making an edible treat.

On White Day, It’s the men’s turn to reciprocate, by giving chocolate, or trinkets, or more elaborate displays of affection (if they are positively responding to a Valentine’s Day romantic confession).

So, Valentine’s Day is celebrated on February 14th (all over) and White Day is celebrated on March 14th in various countries in Asia.  Additionally, South Korea (some websites suggest Japan as well), has started to adopt the concept of “Black Day”, in which single people gather and console each other with food if they did not receive White Day or Valentines’ Day gifts.

Whether you participate in Valentine’s Day or not, the team at Anime Binge hopes you have a pleasant week, and lots of chocolate (they go on sale after the holiday!), hugs, anime (we recommend “Yuri on Ice” for a new show, or “Vandread” for a classic romcom binge), plushies, or whatever makes you the most happy about being you!  Have a great week!